A cookie is information stored on your computer by a website you visit. Cookies often store your settings for a website, such as your preferred language or location. This allows the site to present you with information customized to fit your needs. As per the GDPR law, companies need to get your explicit approval to collect your data. Some of these cookies are ‘strictly necessary’ to provide the basic functions of the website and can not be turned off, while others if present, have the option of being turned off. Learn more about our Privacy and Cookie policies. These can be managed also from our cookie policy page.

IE10 and below are not supported.

The Minnesota Department of Transportation (MnDOT) is developing a future vision for the 10-mile stretch of Highway 47 (University Ave.) and Highway 65 (Central Ave.) that extends from where they meet in Northeast Minneapolis northward through Columbia Heights, Hilltop, and Fridley to County Highway 10 in Blaine and Spring Lake Park.

To better understand the existing conditions and transportation needs of the study area, MnDOT and project staff carried out an extensive public engagement program that reached more than 2,200 residents and stakeholders. The MnDOT project team and its partners engaged with people in the study area in October and November 2020. The public engagement program was largely successful in connecting with the broad group of community members and organizations that rely on University and Central avenues. The project team made special efforts to reach people with different backgrounds, spoken languages and perspectives. The engagement work is part of a larger MnDOT study analyzing both transportation data and community input along the roads, which is called a Planning and Environmental Linkage (PEL) study program. This program emphasizes community engagement and collaboration early in transportation planning and environmental processes.

Pedestrian safety was a significant concern along both University and Central avenues, but survey results indicated that people tend to have a less comfortable experience along the former. Twenty percent of respondents wanted motorists to slow down, while 16% mentioned that drivers disobeying traffic laws was a problem. Additionally, pedestrians indicated that more crosswalks are needed, and the traffic lights for some that are in place don’t give them enough time to cross. Among transit users, the most significant areas of improvement included adding more bus shelters and implementing a better snow removal process along sidewalks and near bus shelters.

Bicyclists and non-bicyclists alike generally agreed that bike safety should be addressed along both University and Central avenues. Overall, 81% of survey respondents said they feel unsafe while biking along University Avenue, while 83% said the same regarding Central Avenue. Bicyclists who travel along the study area mentioned that motorists were a concern because they speed or don’t pay attention. Many respondents suggested adding or expanding bike lanes, including protected ones, in the study area.

People who had traveled within or through the study area generally felt the safest when doing so by car, but many motorists expressed concerns that vehicle traffic may negatively affect pedestrian and bicyclist safety. Survey respondents were concerned about speeding, and many suggested lowering speed limits, better street design and increased enforcement to curb the issue. Many also mentioned that traffic lights around the study area feel out of sync, and both streets become very congested. 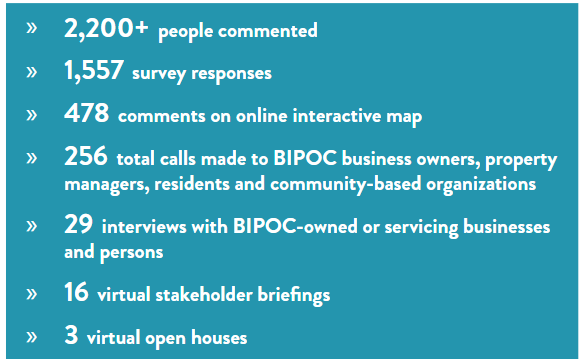 Thank you for your contribution!

Help us reach out to more people in the community